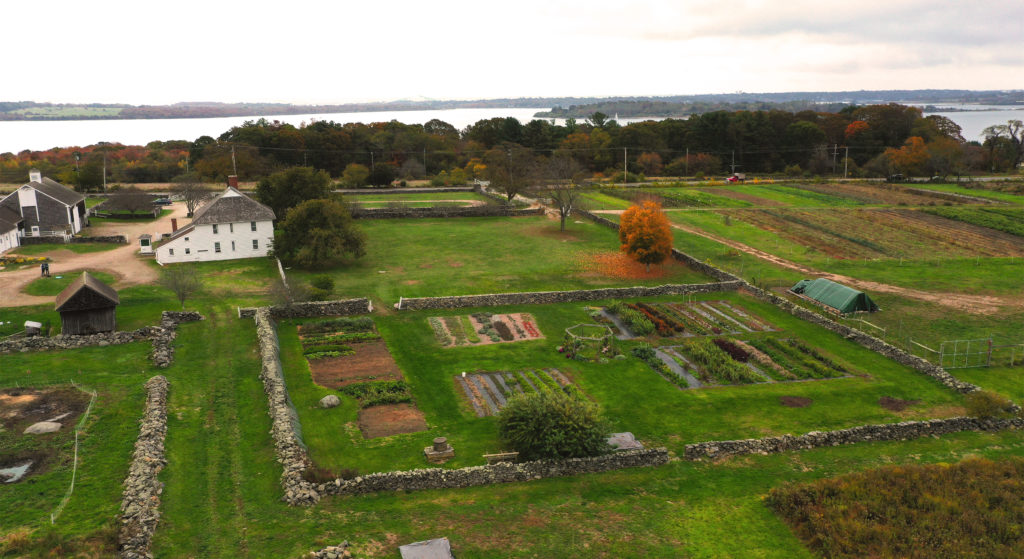 In some essential ways, very little has changed over the centuries at Casey Farm. Indigenous people were drawn to this fertile strip between the bay and river because of the abundant food sources more than ten centuries ago. The same three hundred acres that were surveyed in 1652 are the same our farmers work today. Continuity was maintained by eight generations of ownership by one family from 1702 to 1955, and then stewardship by Historic New England from 1955 on.

The farm house, barn complex, family cemetery, gardens, fields for crops, pastures for animals, stone walls, and chicken coops would all be recognizable to yesterday’s farmer. The rhythms of the agricultural season and even the heritage breed animals have not changed, and yet Casey Farm is on the leading edge of green practices that more and more people realize are vital for the future.

Today the site is a museum, organic working farm, education center, community gathering place, and conserved open space. The way we connect people to the land, its people, and our community have made it a popular and beloved destination. Enjoy your tour whether you are able to view it as you move through the farm, or viewing it from a distance.

Fly Over the Farm

300 Acres from Narragansett Bay to the Narrow River
Fly Over the Farm
2:29

Casey Farm is Historic New England’s most visited site, normally having about fifty thousand visitors annually. There’s a lot happening here! It is one of thirty-eight sites owned by Historic New England and one of four in Rhode Island. To find out more about our hours and how you can get involved, please call 401-295-1030 or visit HistoricNewEngland.org.

Museum
The property is listed on the State and National Register of Historic Places and we consider all of the three hundred acres as museum space offering testimony to the many people who have inhabited the site. The circa 1750 farm house includes a museum gallery that is part of a guided tour, but visits to see the family cemetery and barnyard with our farm animals are also part of the guided tour. Historic New England maintains the farm buildings, stone walls, gardens, pastures, fields, and woodlands at one of the few intact plots left from the colonial era in Rhode Island.

Working Farm
Casey Farm is a Rhode Island Certified Organic farm growing vegetables, fruits, herbs, and flowers and raising barnyard animals. The produce and eggs, honey, maple syrup, and other local items are available through a weekly farmers market with several other vendors offering locally produced goods held seasonally from mid-May through October on Saturday mornings. A share of Casey Farm’s produce and access to buying additional items can also be purchased in advance through our Community Supported Agriculture (CSA) program. CSA members sign up for a twenty-week share starting mid-June through the end of October.

Children’s Education
Children’s education programs are offered to schools, town recreation departments, and home schooled students throughout the year either here at the farm or at the schools. Our signature program is Project CHICK, where we teach about life science through chickens hatching in classrooms. We also offer the Casey Farm Summer Camp with week-long or day-long activities in July and August, along with many other farm-based children’s activities throughout the seasons.

Special Events
We offer activities for people of all ages, including seasonal guided and group tours, special events, rentals for private functions, and programs for adults and families.

Conserved Open Space
Though the farm core with the farm house, barnyards, and farm fields may have limited public access when we are not offering a public activity, staff work here year-round and you can visit in person year-round to hike on our two miles of walking trails. The trails to Casey Point and to the woodlands are open dawn to dusk and you can find hiking maps on Casey.Farm.

Farms are excellent places to delve into what we owe and what we should own up to in our relationship with all people who worked the land. The land we now cultivate was cultivated by the Narragansett people and their ancestors for millennia and brutally taken from them through force and unfair transactions. Colonists of European descent found land that had been kept clear through the Indigenous practice of controlled burning so that the Narragansett people could raise and gather a healthy range of foods, land sadly cleared of so many people through disease, war, and enslavement brought on by contact with Europeans. Colonists viewed the open grassland as an opportunity to transplant their way of life in England that relied on grazing domesticated animals and sowing non-native crops, altering the ecosystem.

The same colonial and racist attitudes that dispossessed Indigenous people led to the kidnap, sale, oppression, and forced labor of African people, Indigenous people, and people of mixed backgrounds. The economy of this area and the success of this land were dependent on the labor of enslaved people and the displacement of Indigenous people, allowing the property to be passed down through the generations and eventually donated to Historic New England.

We still benefit from this history of cultivation tied to oppression even as we strive to enlighten ourselves and our visitors about it, and as we work toward inclusion, diversity, equity, and accessibility through our organization.

A Year on the Farm

Casey Farm gives us gifts of beautiful sights, healthy and delicious food, and amazing animals that make people smile every season of the year. View a collage of each season by tapping through the four seasons in the gallery below, clicking on the slider underneath, or clicking right to get to the next season. You can even zoom in and take a closer look at your favorites.

and their ties to the land

Morey to Coggeshall to Casey

Remarkably, this land was owned by the same family for 253 years. In 1702, Joseph Morey acquired the three hundred acres on Boston Neck in the Narragansett Country of the colony of Rhode Island. In 1652, the land had been acquired from Cogninaquand, the leader of the Narragansett people, and passed through investors’ hands until Morey’s family settled permanently and set up a successful plantation that traded produce via Newport. Joseph and Mary Morey’s only daughter, Mary, inherited the land with her husband, Daniel Coggeshall of Jamestown.

Their son, also named Daniel Coggeshall, married a woman also named Mary, Mary Wanton. By then, the family were members of the Society of Friends, or Quakers. Daniel and Mary raised eight children, and their daughter Abigail would continue to live on the land into the early nineteenth century with her husband, Silas Casey. He was a merchant who made his living by shipping dry goods up and down the East coast, to the West Indies, and to Europe. Abigail, who was the mother of their ten children, was also descended from Quakers on both sides of her family. Silas descended from three generations of Irish immigrants who settled in nearby East Greenwich where Silas continued to own property along with managing the plantation they called Boston Neck Farm.

Boston Neck, named for the home city of its colonial purchasers, is a strip of land about seven miles long between the Narrow (or Pettaquamscutt) River and the West Passage of Narragansett Bay facing the island of Jamestown. First prized by Europeans as grazing land and a source of graphite, it became the perfect spot to produce goods like wool and cheese to ship overseas chiefly to the West Indies through the nearby major shipping city of Newport. In this “Narragansett Country” were many such plantations, of which Casey Farm was on the small side at three hundred acres; the largest ones were three thousand acres. Today, Casey Farm is the only intact plot left.

The family made a prosperous living until Newport was occupied by the British in 1775 when the whole area was plunged into an economic depression. After the Revolutionary War the farm’s owner was Silas and Abigail’s oldest son, Wanton Casey, who became a business partner with Silas. He had spent some time overseas in France learning the trans-Atlantic trade and time in the new territory of Ohio where he met his future wife, Elizabeth Goodale. Returning to the farm on Boston Neck in 1786 – 1787, Wanton and Elizabeth found that the international market was dried up and they decided to rent to tenant farmers. This became the pattern for the next two hundred years. 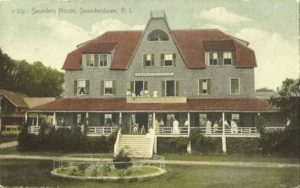 By the middle of the nineteenth century, the economy improved with people discovering the desirability of coastal Rhode Island as a resort area to escape the heat of summer in cities like New York. Again, Newport was the pinnacle of this trend, but Casey Farm’s neighborhood now named Saunderstown benefited from a boatyard just South of the farm, which evolved into a ferry service, and then the Saunders House Hotel.

In 1842, the farm passed to the next generation owner, Thomas Goodale Casey, a New York resident who, with his relatives, spent summers at the farm. He took an interest in improving the farm, and, having gone to considerable difficulty to keep the three hundred acres together, Thomas Goodale Casey thought he was passing the property down whole to his nephew, Thomas Lincoln Casey. Unfortunately, Rhode Island did not recognize his New York will and property disputes continued until Thomas Lincoln Casey finally bought out or convinced relatives to give him sole ownership by the 1870s.

Thomas Lincoln Casey was the son of an Army general, Silas Casey. Thomas, too, served from the Civil War through the 1890s, and rose to the rank of brigadier general with his greatest accomplishment of engineering the completion of the Washington Monument. Having the head of the Army Corps of Engineers as the farm’s owner meant that the buildings were attended to with care, as were the family cemetery and the stone walls. He engineered a way to rehabilitate and flood the cranberry bog, finished the cow barn complex, and cared for all the outbuildings. The landscape included three apple orchards, one hundred elm trees, many acres for grazing sheep and cows, and a large woodlot. Thomas married Emma Weir, whom he met while attending West Point. Their sons who summered at the farm, Thomas Lincoln Casey, Jr., Harry Weir Casey, and Edward Pearce Casey, all followed in their father’s footsteps by studying engineering or architecture. The oldest and youngest sons stewarded the farm their father re-named Namaukut, making repairs and formalizing the piazza into a Classical porch.

Edward Pearce Casey, who attended l’Ecole des Beaux Arts in Paris and practiced architecture in New York, married Lillian Berry. Having no children and no surviving immediate family members, they decided to donate the land, farm house, and outbuildings as a working farm entrusted to the organization started by their friend, William Sumner Appleton. The Society for the Preservation of New England Antiquities, as Historic New England was then called, took up the stewardship of the land in 1955.