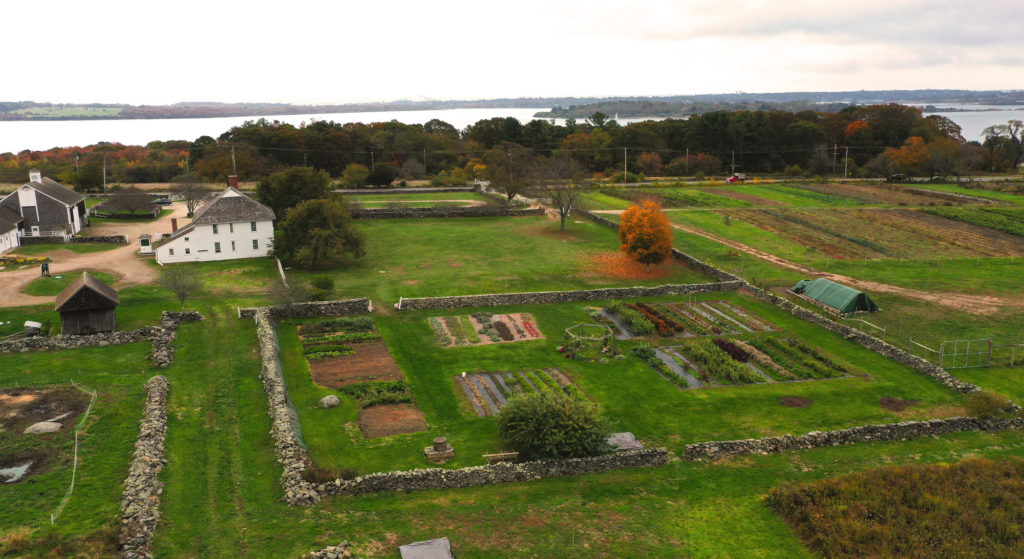 Casey Farm’s three hundred acres are lined with more than ten miles of stone walls. Each day, through the changing weather, the walls are a gorgeous sight and frame spectacular views. Walls define how we move around the farm, shelter us from the wind, and hold in warmth or coolness. They help protect the farm animals and the crops, and make the gardens bloom longer.

At first, stone walls were just what happened once colonists deforested the land and the glacial stones underneath made their way to the surface—they had to be hauled into piles. Those piles of stones eventually helped to define fields, boundaries, and roadways. Often, in the wintertime, farmhands took time to balance the stones into more enduring structures. In Southern Rhode Island, cows, horses, and sheep were big business, so walls needed to be at least five feet tall to keep herds from climbing over them and to protect the livestock from predators. More than that, these walls were a great way to show off. The fancy walls near the farmhouse are fitted with two sides of carefully balanced stones with smaller fill in between, then topped by huge flat rocks. Only construction skill and gravity keep them standing.

Who Built the Walls?

Similar to most Southern Rhode Island plantations, we have some documentation linking Casey Farm to slavery in the eighteenth century. Though none of the documents link the labor of enslaved people to building stone walls, it is plausible that enslaved African-Americans and Native Americans may have been involved. We intend that further research will shed some light on these questions. 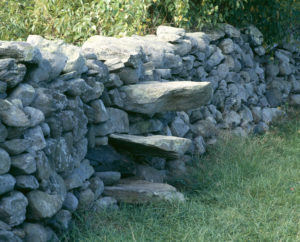 Garden wall that may have been built by Reynolds Knowles with an “up-and-over” or built-in stile.

There is documentation in the Casey Family papers linking three different late-eighteenth century tenant farmers and a hired hand with wall construction. One of these people, Cezar Northup, was a free person of color, and several of his family members worked as farmhands.

Farm records tell us that one tenant farmer in the 1780s, Reynolds Knowles, built more than nine hundred feet of five-foot-tall walls around the barnyard and pastures in return for 650 pounds of Narragansett cheese! Back then this kind of cheese was a valuable commodity that Knowles could trade or sell.

Casey Farm’s dry-laid stone walls still stand today, including some built by Reynolds Knowles around the “sasyard,” the kitchen garden.  Even with the best stewardship, animals, weather, and people will inevitably cause damage to stone walls and several repair campaigns had been done over the years. By 2019, the walls in the most heavily visited public areas at Casey Farm near the farm house and barnyard needed several repairs. 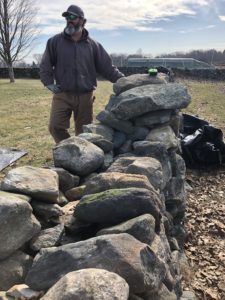 Through the generosity of donors and private foundations, Historic New England hired Mike Minto of Rhode Island Stone Walls to repair about seventy-five percent of these walls under the direction of our preservation manager, Margaret Back. The work started in October 2019 and was completed just before our sites had to temporarily close to the public in March. It is solitary work anyway, and Mike only needed the occasional assistance of a farmer driving a tractor for the largest stones. Mike is a master at his art with a deep understanding of how these walls were built, and it was amazing to see him dismantle the walls and rebuild them largely by hand.

Deep inside the wall dividing the farmhouse lawn from the garden (the one Reynolds had built), Mike found bricks that match the c. 1750 bricks in the central chimney of the farmhouse. He also found some wrought iron 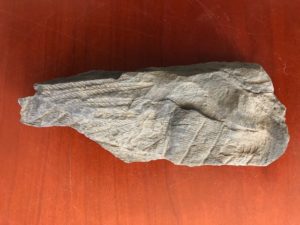 Many Gardens to Visit 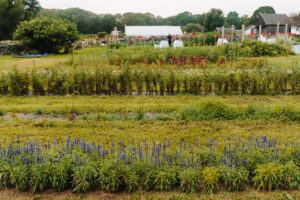 The first recorded garden in the archives is the “sasyard” from Silas Casey’s eighteenth century papers. A derivation of “sauce yard,” this was a kitchen garden close to the location of the first farm house on the property, now marked only by a well. Here is still where our CSA members cut flowers and herbs and where we grow a nice variety of seasonal vegetables for education program participants. It is still surrounded by the same wall Silas Casey saw. 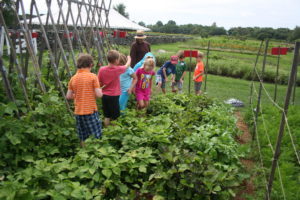 The Education Team plants and tends this garden and teaches children how to do the same. Connecting children to their food sources with hands-on experiences encourages healthy eating habits and an awareness of eating what is in season, the benefits of organic growing, and the pride in growing something. Much of the produce is consumed as snacks for kids or demonstration cooking. Kids and grown-ups even learn the medicinal properties of herbs in this garden. If you visit on a tour, you might just get invited to pick a sample for yourself. 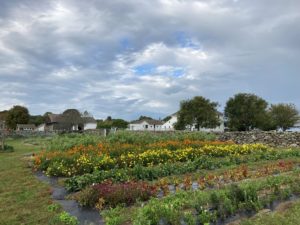 The Farm Crew plans and cares for this garden for the benefit of the Community Supported Agriculture members. The rows of flowers are part of the farm share, and many of the people working here get a share in return for their labor, called workshares. For several years our head gardener has been Sheila Nixon, who is multi-talented as a tour guide and farm teacher, too. It is labor of love, to be sure—and a garden full of love is a good place to get married! Please don’t pick from the ornamental beds around the pergola because those are for the lovebirds. 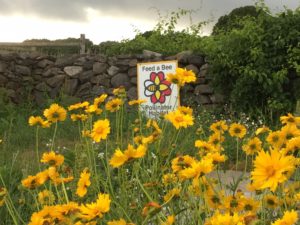 One could argue that all of Casey Farm is a pollinator paradise, because we use no pesticides and grow so many plants here. Still, we all know that pollinator insects are the key to producing food, and supporting their health is vital. Plus, the workshare-supported beehives on the property produce delicious honey! We have long maintained parts of the property with meadows of native plants that are the bee’s knees to pollinators. The volunteers from the Pollinator Rescue Project of Rhode Island added an even more diverse array as a demonstration garden just adjacent to the parking area so everyone coming to visit can linger and learn. 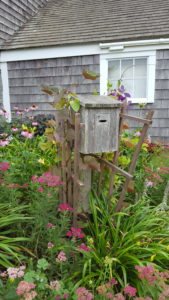 Tucked beside the stone walls, near the old woodshed, near the Share Barn, and everywhere you look are an ever-changing display of blooms that our garden volunteers and workshares have spent many hours cultivating. Their expertise and passion shows!

Bright Oriental poppies are the star of the show each June in the front lawn perennial beds.

Sunflowers are planted in a different location each year and are offered to CSA members as part of their share. They become a popular place to take snapshots and excellent food for the many wild birds who visit.

Apple blossoms in late May make the front lawn gorgeous. Varieties include ornamental crabapples (foreground) and heirloom Williams apples. The Williams variety dates back to about 1750, the same as the farm house, and ripen early in the season.

Two old bathtubs were long ago placed outside the Share Barn and they make useful and picturesque planters.

The old concrete horse trough is transformed each season by Nelumbo Water Gardens with a variety of water lilies, water hyacinth, and magnificent lotuses. They even provide koi and a kid favorite, a little toy crocodile.

Plants in the Education Garden bed are identified with bright signs painted in English and Spanish. It always includes beans (frijoles), peppers (pimientos), and carrots (zanahorias). A new scarecrow stands guard every season.

Perennials and annuals are planted as informal ornamental beds in many areas of the farm. These hydrangeas, rudbekias, lantana, and violas make a happy combination near the Share Barn entrance.

Cosmos and many other annuals are planted for everyone to enjoy seeing and smelling, and for our Community Supported Agriculture Share members to take home. The bees and other pollinator insects appreciate that plenty stay in the flower beds.