back
Cultivating the Land
ROOM NAVIGATION

Farmers deserve our appreciation, respect, and support for the obvious reason that through their hard labor, they provide us with sustenance. At Casey Farm, they grow a remarkable variety of organic fruits, vegetables, flowers, and herbs that are a sensory delight and the cornerstone of a healthy diet. More and more people realize that small, organic farms like Casey Farm provide their local community, country, and the Earth with much more.

Our farmers model and promote ethical treatment of the animals we raise. The animals have room to graze, good organic food, and kind treatment even if their purpose is to become food for people. We promote variety in farm animal species, raising many heritage breeds. This love of animals teaches responsibility and fosters connections to nature, especially for children.

This farm is healthy for the environment because it is a good, low-impact neighbor to the bay and river. Our sustainable practices include low-till management to prevent runoff and maintain nutrients, use of solar power for fencing, and irrigating fields and gardens with our pond and with the 500-gallon rain collecting sculpture Three Sisters: RainKeep. The landscape contains several ecosystems that nurture wild animals and native plants, and it nourishes pollinators we all need to grow our food. Our commitment to farming without pesticides supports all of these plants and animals. Heirloom varieties of plants are important for the diversity of our food sources. All the plants and trees act as a carbon sink and source of oxygen. By distributing food directly to our local customers, we cut down on carbon emissions. Add to that our mission of historic preservation, which saves countless labor and material costs, and this is a green place in more than one sense of the word.

It is healthy for people to get some exercise in the open space and trails or work in the fields and gardens, and to even make natural medicines from the cultivated and wild edibles. The views of the sky, land, and water kept open by generations of farmers is good for the mind and spirit. Immersion in nature is therapeutic, as are all the connections to other people that are made through involvement with the farm. The many activities at the farm build community and enrich minds through its learning opportunities. Our non-profit mission means that we are dedicated to maintaining the landscape, historic buildings, and traditional methods so that as many people as possible can share in the bounty.

Dig in and Volunteer 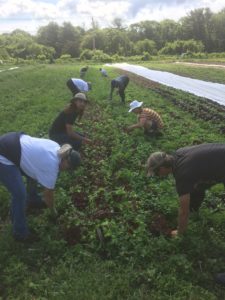 This land is cultivated by a dedicated crew of farm managers, hired farmhands, and workshares who receive a share in the CSA program through their labor. Volunteers are welcome here to fulfill educational requirements, to spend the community involvement hours provided by their employers, and for the benefits of contributing to a beautiful place in a friendly setting. Here’s how you can get involved:

Cultivating Agricultural Fields – Seasonal hire opportunities can be found on Historic New England’s website and the New England Ag Exchange website. From June through August (and beyond by appointment) we offer volunteer opportunities by prior arrangement to weed the organic agricultural fields with farm staff supervision. Please ask the farm managers more about this, at CaseyFarm@historicnewengland.org or call 401-295-1030.

Garden Beds – We have a small crew of volunteer and workshare gardeners who maintain the beautiful perennial and annual beds near the farm house and barnyard. They would benefit from any time you would like to give (by prior arrangement), and love to talk gardening! Please contact Sheila Nixon for more about this: sheilanix@cox.net.

Grounds Maintenance – Picking up debris either carelessly left by the roadside and on our lawns, or that has landed there from windy weather instantly improves our first impressions, helps to keep our historic stone walls clear, and improves our commitment to the environment. This is a task that can be done at almost any time by signing up with Jane Hennedy at JHennedy@historicnewengland.org or calling 401-295-1030 ext. 5.

Casey Farm Market – Volunteers to help set up, run, and break down the market are very welcome. It takes place each Saturday morning from mid-May to the end of October on the front lawn at Casey Farm. Please email the market manager at CaseyMarket@HistoricNewEngland.org.

The Casey Farm we appreciate today was built on the labor of enslaved people. While we have no direct evidence that enslaved people worked at Casey Farm, we do have evidence that Silas Casey (1734-1814) was an enslaver of at least three people named Wat, Ezekiel, and Moses who may have worked here or at his other property in East Greenwich, Rhode Island. He and his ancestors lived in a culture that condoned and promoted slavery and benefited from an economy based on the labor of enslaved people, benefits that we in many ways have inherited.

By 1755 during the heyday of the plantation culture in Southern Rhode Island, called the Narragansett Country, the percentage of enslaved people was far higher than any other Northern colony. Scholar Christy Clark-Pujara of the University of Madison-Wisconsin sheds much light on the subject in her book Dark Work: The Business of Slavery in Rhode Island.

All northern colonists, New Englanders in particular, participated in the West Indian and Atlantic slave trades, but Rhode Islanders were the most deeply entrenched. Their domination of the North American trade in African slaves gave them increased access to slaves. Merchants and tradesmen in Newport and Providence put their slaves to work in their homes and shops and on their ships. Farmers in the Narragansett Country put thousands of enslaved men, women, and children to work producing foodstuffs and raising livestock for the West Indian trade. Local slave labor played a key role in the growth of commerce in Rhode Island; moreover, abundant plantations of the West Indies provided farmers and merchants with a near-perpetual market for their slave-produced goods. (page 29)

Professor Clark-Pujara points out that enslaved people “lived and labored in Rhode Island from the birth of the colony, in 1636, until slavery was abolished in 1842.” We are dedicated to keep researching and bringing facts to light about all the people whose lives contributed to making this place.

People Who Worked the Land

From what we know about this farm and ones like it when it was founded in the first decades of the eighteenth century, a variety of crops were grown relying on the labor of enslaved Indigenous and African people. Professor Christy Clark-Pujara in her book Dark Work: The Business of Slavery in Rhode Island described what is also evident in the archives for Casey Farm:

Located along the southeastern coast of Rhode Island, the Narragansett Country—also known as South County—was first cleared and farmed by Native Americans. The region’s rich soil, moderate temperatures, and easy access to Newport trade made it an ideal place for large-scale commercial agriculture and grazing. There was no staple crop. Instead farmers bred horses, cattle, and sheep, manufactured dairy products (primarily cheese), and cultivated small amounts of Indian corn, rye, hemp, flax, and tobacco. Slave labor was essential to the economy in the Narragansett, as slaves produced nearly all the exported goods. (page 26)

Although the 1790 census for the state indicates there was a small number of enslaved people residing in Rhode Island, the presence of many of Silas Casey’s laborers are listed separately in the census under the column of “other free persons,” suggests that he was no longer a slaveholder. 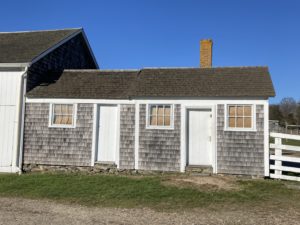 It is documented that Casey Farm was mainly worked by tenants, some African American, some Native American, some of European descent, throughout its history. In addition, Silas Casey’s records show payments to twenty-seven men (nine of whom were identified as people of color) working as hired hands. These farmers produced corn, wheat, rye, barley, apples, raised sheep, dairy cows, and made famous Narragansett cheese.

One person of color that appears often in the account books over a span of fifteen years is Cuff Gardner. He did a variety of work on the farm, from killing hogs and butchering, to carting wood, setting apple trees and trimming the orchard, and building the orchard wall. He was paid in cash as well as salt, corn, and potatoes. Prof. Clark-Pujara gives us insight into life in Rhode Island as a free person of color like Cuff Gardner:

The vast majority of black and mixed-race Rhode Islanders…were free by the turn of the nineteenth century; however, free was a terribly relative term. People of color still had to contend with slavery on multiple levels. The practice of slavery still continued, as did statuatory slavery. Free blacks also had to cope with the legacies of slavery—most urgently the poverty that came with nothing but freedom. Moreover, being free did not mean having rights. Free blacks had ambiguous legal protections because they were not universally recognized as citizens…Interracial marriages were banned in 1789, and African American men were barred from voting in 1822. (page 94)

In 1804 Silas Casey noted Cuff’s “lost days,” which included “Negro Election” and “Negro Town Meeting,” and a half day lost to being unwell. By reading deeper, we see glimpses of personal time and social life, particularly the regular participation in Negro Election festivities.

Silas Casey entered into agreements with two men of color who worked as tenant farmers: Henry Niles (whom Casey identifies as a Native American) and Henry Carr (a free African American). Both men lived in small houses on the farm rent-free in return for working for Casey a specific number of days per week.

Stewards of the Land Over Time

A summary of those who lived, worked, and/or owned the land now known as Casey Farm

For 10,000 years, humans have occupied the land on which Casey Farm now sits. The land was called Namcook by the Narragansett people, indigenous to this land. By the end of the 1650s, the land was sold and renamed “Boston Neck.” From 1658 onward, this farmland was owned and occupied by tenant and gentleman farmers until 1955 when Historic New England, then known as the Society for the Preservation of New England Antiquities, took ownership.

These are the names of former owners and occupants of Casey Farm.

These are people who were tenant farmers and renters of Casey Farm, unless their roles are otherwise stated.