According to the Rhode Island Historical Cemetery Commission, there are more than 3,200 known cemeteries throughout the thirty-nine towns in the state. They are documented in a database maintained by the commission that is a national model for accuracy which was started by researchers including John E. Sterling. Sterling discovered that cemeteries in Rhode Island are laid out in a much more dense pattern than other New England states. The reason is that Rhode Island was the only colony with separation of church and state. Sterling wrote that “In the Massachusetts Bay Colony or in Plymouth Colony each town was essentially a parish of the church. There was a town green with a meeting house, a place to browse cattle and exercise the militia, and usually a cemetery.” In Rhode Island where people settled to practice religious freedom that they could find nowhere else in the world, rural towns had several small denominations that could meet in private homes. When someone died, they were most often buried in a family cemetery which was the pattern at Casey Farm.

In larger towns that could support churches, meetinghouses, or synagogues, burial grounds were adjacent to these. The most densely populated towns of Newport and Providence had municipal cemeteries; Newport’s Common Burying Ground was opened in the 1660s and Providence’s North Burial Ground in 1700. God’s Little Acre, the African American burial section in Newport, reflects the fact that Rhode Island had a larger African American population than surrounding areas from its heavy involvement in the business of slavery, and from the many descendants of enslaved people who continued to live and work here.

The family cemetery at Casey Farm is unusual in that burials continued from the early eighteenth century through to the mid-twentieth and older burials were even moved in to keep six generations of the family in one place. Are there other, unrecorded burials in this place? Fieldstones with no carving and broken stones suggest that is true, and future research may reveal more about all the people interred at Casey Farm.

A Cemetery in Your Backyard?

Cemeteries are generally peaceful places to learn about people from the past, their relationships, and their culture. Before churchyards, before public and private community cemeteries, people of European descent in America laid out their family burial grounds on their own land with carved or uncarved wood and fieldstone markers. Later in the seventeenth and into the nineteenth century, slate was the material of choice and carved by professional stonemasons. Marble slowly became popular after the Revolutionary War through to the late nineteenth century. From that time to today, granite is the most common material. With this knowledge, without even reading the dates on the stones, it is possible to get an approximate date for a burial ground.

Likewise, the layout of a cemetery is a clue to its age. Early colonists followed the tradition of planting stones in more or less straight rows oriented to the east, from the Puritan belief that souls would be ready to rise with the sun on Judgement Day. Many early graves include a headstone with carving on the west side that one reads while facing east, and a footstone with carving on the east side. The middle of the nineteenth century with its more elaborate mourning customs produced the garden-style cemetery, with winding paths and plantings to make it a more pleasant place to visit. The appearance of the cemetery in the 1870s shows how the family put in winding paths to follow the trend. The practicality of the power lawnmower in the twentieth century brought the straight rows back in many places. The Casey Family Cemetery contains all these different gravestone materials, many styles of carving, and even headstones and footstones for many graves well after they went out of style, all oriented to the east.

The Casey family’s cemetery will be maintained, along with the working farm they donated, because it has been in the care of Historic New England since 1955. Many others remain on private land and by law may not be removed or harmed without thorough review and there are strict penalties for vandalism. People wishing to visit these private burial grounds must get permission from the property owner, who should be sympathetic to descendants, genealogists, veterans groups wishing to place flags, and volunteers wishing to assist with recording and cemetery maintenance. Some towns even provide tax benefits to a property owner for the cost of maintaining a historical cemetery. The Rhode Island Historic Cemetery Commission is an excellent source for researching and maintaining the cemetery you might find in your backyard.

Historic New England advocates for cemetery preservation and maintains five more along with the one at Casey Farm: Peabody Family Burying Ground and Elias Smith Burying Ground, both in Middletown, Mass.; Frost Cemetery in New Castle, N.H.; Goodwin Family Cemetery at Hamilton House in South Berwick, Maine; and Rundlet-May House in Portsmouth, N.H., even has a pet cemetery. There 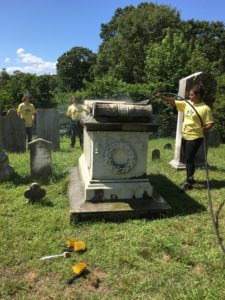 are many trusted places to seek advice on cemetery preservation, including the National Park Service and the Association for Gravestone Studies, and they all agree on certain procedures. The first priority is always groundskeeping with the right tools to keep invasive plants down and prevent damage to the stones. Our crew does a great job at Casey Farm! Next is causing no harm through incorrect conservation efforts or trying to do gravestone rubbings. For example, soft marble, which is also susceptible to chemical erosion, must be handled differently from sharply defined but easily shattered slate.

The third is careful cleaning of biological growth like algae and lichens using the gentlest means possible. At Casey Farm, students from Roger Williams University were trained by our staff to examine the stones for weaknesses, wet them with clean water, gently scrub with soft brushes from the ground up, and rinse with water again from the top down. We finished our work with a product that is safe for these surfaces but removes growth called D/2 Biological Solution. 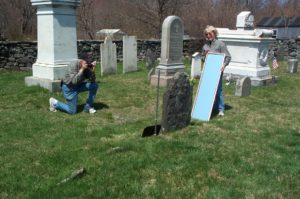 Finally, experts should be consulted to repair broken stones or re-set them in place. Historic New England hired Fannin-Lehner Preservation Associates of Concord, Massachusetts, in 2001 to study and make recommendations for Casey Farm’s cemetery. They demonstrated the technique to direct raking light across a headstone with a mirror to get the best photographs and reported on repairs to some of the older box tombs. Experts can also capture hidden details with advanced photographic techniques and ground-penetrating radar to find lost burials.