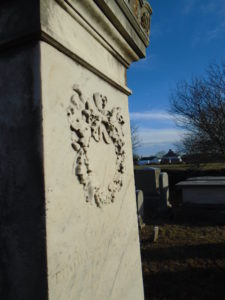 The Casey Family Cemetery on the north border of the farm represents six generations of the family from 1747 to 1955. The plot was chosen at an unknown date in the seventeenth or eighteenth century most likely by the second or third generation of the family, whose markers were either not carved or have long since been broken. After 1855 Thomas Lincoln Casey brought in some of the oldest marked stones from nearby East Greenwich and surrounded the plot with a stone wall. He wrote in 1881 of the farm and family burying ground:

As a piece of property, the place is nearly valueless…But as an heir-loom for its preservation of which many sacrifices have been made by my ancestors, and as a repository of the ashes of my beloved kindred, the place is beyond price, and I trust will ever by zealously guarded and cherished by me and mine.