A Cemetery in Your Backyard?

Cemeteries are generally peaceful places to learn about people from the past, their relationships, and their culture. Before churchyards, before public and private community cemeteries, people of European descent in America laid out their family burial grounds on their own land with carved or uncarved wood and fieldstone markers. Later in the seventeenth and into the nineteenth century, slate was the material of choice and carved by professional stonemasons. Marble slowly became popular after the Revolutionary War through to the late nineteenth century. From that time to today, granite is the most common material. With this knowledge, without even reading the dates on the stones, it is possible to get an approximate date for a burial ground. 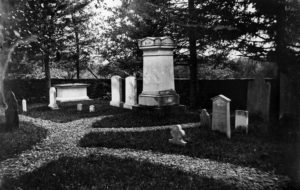 Likewise, the layout of a cemetery is a clue to its age. Early colonists followed the tradition of planting stones in more or less straight rows oriented to the east, from the Puritan belief that souls would be ready to rise with the sun on Judgement Day. Many early graves include a headstone with carving on the west side that one reads while facing east, and a footstone with carving on the east side. The middle of the nineteenth century with its more elaborate mourning customs produced the garden-style cemetery, with winding paths and plantings to make it a more pleasant place to visit. The appearance of the cemetery in the 1870s shows how the family put in winding paths to follow the trend. The practicality of the power lawnmower in the twentieth century brought the straight rows back in many places. The Casey Family Cemetery contains all these different gravestone materials, many styles of carving, and even headstones and footstones for many graves well after they went out of style, all oriented to the east. 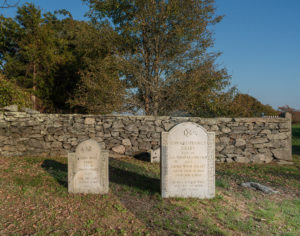 Headstones of Lillian and Ned Casey, the newest headstones at 1955 and 1940 respectively

The Casey family’s cemetery will be maintained, along with the working farm they donated, because it has been in the care of Historic New England since 1955. Many others remain on private land and by law may not be removed or harmed without thorough review and there are strict penalties for vandalism. People wishing to visit these private burial grounds must get permission from the property owner, who should be sympathetic to descendants, genealogists, veterans groups wishing to place flags, and volunteers wishing to assist with recording and cemetery maintenance. Some towns even provide tax benefits to a property owner for the cost of maintaining a historical cemetery. The Rhode Island Historic Cemetery Commission is an excellent source for researching and maintaining the cemetery you might find in your backyard.